In the Kingdom of Dernexes, where Wind magic equates to status and power, there is unrest among the people. Slaves live in desolate conditions, with no rights and are treated worse than dogs. Neighbouring countries border on war as King Ea lives in lavish luxury at the expense of increasing poverty and death among the civilians.

Tia, a sheltered, naive Caster apprentice travels with a Windcaster when he is summoned for council with the King. The journey through the various, apparently well-to-do areas of the country shows only how much people need help, help which the King is adamant to withhold. Desperate times call for desperate measures.

Times are about to change...

The Windcaster is a coming-of-age epic fantasy-adventure story I wrote for Wattpad, started on 21 August 2013 and completed on 25 December 2013: a total of 112k words. It is a tale of a young magician-in-training growing up and learning the perfect world she sees through rose-coloured glasses is actually corrupt; socioeconomic inequality is destroying the poorest and the most destitute. Slavery is rife, and those unfortunate enough to be under its system have no human rights and are treated as less than dogs.

The main character is Tia, a vivacious and naive Windcaster apprentice, who has lived all her life in the pretty seaside city of Mooncliffe with the man who trains her, Master Anu the Windcaster of Mooncliffe. Her love for fun and utter lack of heed for danger means she gets into trouble often, creating worry for her nervous but compassionate colleague, Mommu, who also lives in the same little house on a hill.

In Tia's world, Windcasters -- magicians who can utilise Wind magic with their innate talents and magic staffs -- are revered above all else. Their powerful affinity to the Wind is of great contribution to Tia's influential and prospering country, Dernexes. However, Windcasters are also allied, not to their country, but to the Wind. As such, ethical dilemmas have risen in the past and will rise in the future regarding its use, particularly as Dernexes's king, Ea, remains living in lavish luxury and in denial of his country's suffering.

When Master Anu, the Windcaster who trains Tia and Mommu in Wind magic, receives a summon from the king in the Capital, Tia's dream comes true: she finally gets to leave the small, peaceful city of Mooncliffe and travel the country. She will, at last, get to see all the wondrous places the Master spoke of, taste all the delicious delicacies, and meet all sorts of lovely people.

Or so she thought.

With neighbouring countries bordering on war, slaves living in desperate conditions, and dissatisfaction brewing amongst Dernexans, the facade of the stable world she grew up in is about to be shattered. Through a series of unfortunate events and new friendships forged, Tia grows up and makes a choice, made all the more difficult when all the options lead to dire consequences and she has to choose the lesser of many evils.

I am very much an amateur writer, although I do enjoy storytelling. I've never taken any creative writing courses (my high school/secondary school qualifications were biology, physics, chemistry, maths, and classical civilisation) but here, I share my writing experience of "The Windcaster" in hopes it may be helpful.

Initially inspired by "Tales of Earthsea", the Studio Ghibli animation, I've always had that scene in my head where Sparrowhawk takes Arun to that beautiful seaside town. That was where Mooncliffe was born. In my head, a little brown-haired girl skipped her way down the stone steps, ponytail swinging, and was loving every step and breath of sea air. That was where Tia was born.

From there, that scene sat in my head for a good six years until one day, I decided to expand on that scene. The Windcaster played itself out in my head like a movie for the vast majority of the book, so what I had to do was to translate that into text. After Tia makes her way down, she meets someone who will later become important in her story. A bit of mischief, some trouble, and a bruised ego later, her journey begins.

For those who may be interested, Tia's namesake, Tiamat, is from the Final Fantasy XII monster, which is in itself named after a Babylonian sea monster. From there, you can see all of my other characters are named after Babylonian deities or significant characters: Enlil the god of wind, Mommu/Mummu the god of crafts and technical skills, Anu the god of heaven and the sky.

This post contains no spoilers, but I will talk about the plotting and writing. I thought of several highlights of the story where Tia's maturity furthers and the world around her moves on ahead. There are some turn-points when she sees a little more of the world she was so naive about. Between each of the highlights, I have a few smaller peaks for building character and the world, and as I write, I pave my way from peak to peak, and, in the long run, from highlight to highlight.

The story is built to a crescendo, which is then built down again for a bit of breathing time and in anticipation of the final showdown. I also allowed self-discovery and independence for Tia here, because as the main character, she has to play a major role in saving the day.

I hit several writer's block along the way. Most of them were in the second half of the book, where not only I had difficulty visualising the world, I also didn't know where to take Tia next. I knew in the long-term where she was to go, but paving the way there proved to be difficult. With most of them, I just skipped that scene and carried on writing: the next scene, the next week's events, additional scenes that never actually materialised in the Wattpad book. The ending was actually very different to what I had in mind, but I do feel this ending is better. There is enough closure -- the big bad is defeated, the world is saved -- but also leaves enough for me to write a sequel should I wish to.

Although I say in the end author's note I am not planning a sequel, it is an idea sitting in the back of my head. I think I left Tia in a rather perfect world, to the point where I want to ruin it and see how she fares -- oh, how sadistic I sound! But it is what makes a good read: characters in difficult situations making something good out of it. And Tia, with her heart of gold, deserves her struggle for happiness.

So what I'm trying to say is: I can very well envision a sequel to "The Windcaster" once the rewrite is done. When that will be I cannot promise, but I do have several ideas brewing in my head, as well as a new story that runs along the theme of "The Windcaster" although it doesn't happen in Tia's world.

And without further ado, I shall unveil my new cover for "The Windcaster", courtesy of my good friend and extremely talented Photoshop artist Wendythestoryteller. This cover will be implemented in the upcoming week or two. 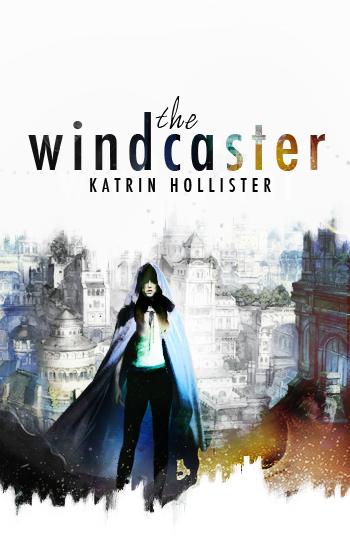 What are your thoughts about it? I love it; it's gorgeous, and I can't wait to show it off to the Wattpad world.

Until next time, when I'll probably blog about some other pets of mine!